As you can see below, after 11 weeks of occupying the top spot in the league, we have dropped down to a tie for first (and technically lose out due to Goals For).  I will take it up with Goguen as we have the head to head and differential, but we may be looking at 2nd place once again.

We were certainly “offensive”, offensively and could get very little going.  Gil and the defense kept us in this tight game, which was 1-0 until Gal tied it up late in the 3rd with a Recchi type scrum goal.  Ruel and Dun both had chances late but we could not slide one past and we ended tying a strong Hyundai squad 1-1.  Without 4 of our top 6 forwards, we mustered as much as we could.  Knight’s injury plagued year continued as his “Upper Body Injury” is still hampering the burly LW’s ability to stay on the ice.  Sully had Visa issues coming in from the Islands and was a late scratch.  Salty finished serving out his 2 game suspension for PED’s and illegal equipment.  But most concerning, Shawn contracted his 4th disease of the year (Lyme, Malaria, EEE and now Ebola) and was unavailable.  With medication arriving from the Congo tomorrow, he is expected back next week.

So, it comes down to the last game of the season.  I will confirm with Goguen what the tie breaker is, but let’s be prepared to run up the score against the lowly last place (and A-Holes of the league) Bulldogs next week.  As I said at the beginning of the season, if we are in 2nd place, we might as well be in last place.  The ownership will accept nothing less than “Meatbird’s Hockey” on the 2014 Monarch’s Senior League Championship Plaque that hangs in Goguen’s garage.

More importantly, is anyone up for tailgate after final game next week?

Big win last night boys. Birds 4 Bandits 2 Thanks to Gil first and foremost for his usual performance. We made a huge upgrade when C Jay showed unannounced and Sully running late again. We started off strong in the first as Ruel playing defense just happened to be in front of the net for a nice finish. Went up two when Shawn who just found out he has Ebola to go along with Malaria and Lyme fed a nice pass to Gal who found the five hole. Bandits won the battle in the second frame to tie the game at two. The third belonged to Sully who found the back of the net twice to seal the victory. Good solid performance by everyone. I want to thank Scott, Shawn and Chris for the water after the game.

In other team notes. Jim Knight was fined 1 case of Old Milwaukee and Al Marsden has been fined and must have the Meat Bird summer party after the Tabor Skate on the 21st. Salty gets a pass for telling C Jay about the game. 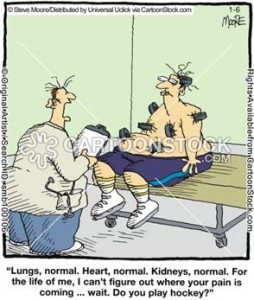 Continuing our undefeated season, albeit with a fairly ugly win.  Thanks to Gil for holding down the fort.  Saltonstall’s return from his 5 week PED suspension was a welcome addition.  Shawn battled through Lyme disease and razor burn to lead the offense once again.  I am glad we get to play those chippy bastards one more time.  Would like to blow them out by 10 goals….

Center Ice continues to nip at our heels, and we face them next week in what could prove to be the season.

But, let’s not look ahead.  This week it’s another 9:30pm puck drop against the team with the snazziest sweaters in the league, team Guinness.  They did give us a good game last time we faced them so let’s be ready.

Tough fought win last week. Thankfully our superior conditioning won out for the 9 skaters and another solid performance by Gil. Most importantly, we had some post game suds (thanking you Gal).

Meatbirds GM Donovan Dunn announced the Summer Meatbirds 2014 schedule this week. Asked if the ‘Birds are shooting to repeat as #2, he replied, “If we don’t finish first, there will be some wholesale changes in the offseason.” Lending further insight into intensity sought for this season, he stated, “I am done tweaking the roster….I may even need to outlaw Shrimp and beer in the clubhouse.”

Team veterans and newcomers alike agreed and welcomed the new attitude from management. Said veteran Jim Knight, “Each player is accountable! One shift at a time!” However, team sentiment seemed to balk at the threatened clubhouse restrictions, with Knight speaking for the team, “That’s over the line!”

Tickets go on sale Saturday for all games.

A grueling 5 game series came to its conclusion Tuesday night at Hetland Arena as the Yellow Hosers defeated the Green Oglethorpe’s 6-3 in front of a capacity crowd frenzied with excitement. After staving off elimination in game 4 with a convincing win, Oglethorpe captain Chris MacLean had the squad ready for action, but Yellow was a determined bunch from the first shift.

C. Jay Wilbur, brought in from the Cedar Rapids junior team replacing Marc Nadeau who was lost for the season to a knee injury, started the scoring, popping in a rebound early to get Yellow on the board. Jamie Knight kept the scoring going, converting a neutral zone turnover to make it 2-0. The teams traded goals and then a fluke shot deflected off the ceiling netting and landed behind Hoser netminder Boo Davison, who couldn’t believe it. After tempers flared, the 1977 rulebook of Meatbird Hockey was consulted and the goal stood up. Defenseman Chris Peck returned fire, chugging down the slot and tucking a shot 5 hole past goalie Tom Evans.

Ulitmately, it did not matter. Yellow kept their 2-1-2 box defensive shutdown system going, with strong defensive games by Steve Taylor and a returning Scotty Dickson (Upper Body Injury), frustrating Green, especially assistant captain S. Paul Coffey. A late rush put on by Green yielded a final goal, but it was not enough. The contest ended with Yellow raising the Meatbird Cup in triumph, and hanging another banner in the Hetland rafters. Series MVP, goalie Davison said “There is nothing sweeter than winning the Cup. The competition was formidable, but I never had a doubt we’d secure it for another year.”

In all honesty, thanks to all of you for playing Meatbird’s this year. Remember, there are strict term limits on the Commissioner’s job, and I know there are a number of you who have expressed interest in it, but I am happy to handle it again next year. Good group of guys makes it fun.

Hope to see you all at Steve Taylor’s on the 26th.

As is usually the case when two great teams square off, The 2014 Meatbird Cup will come down to the final game. The Green Oglethorpes evened the best of 5 series at two games a piece with a convincing 9-7 win over the Yellow Hosers in game 4. The return of Pat O’Connell (upper body injury) and goalie Tom Evans (personal reasons) boosted the spirits of a team on the brink of elimination. They came out firing, and posted a 4-1 lead after 30 minutes of play. Yellow continued to peck away at the lead, but strong play from brethren Clarke on the blue line and some key saves by Evans kept them at bay. Injuries to Marc Nadeau and Scott Dickson hurt, with Dickson rehabbing a separated shoulder and is questionable for game 5. Nadeau is awaiting an MRI, but looks lost for the season.

The game was chippy throughout, with Steve Galavotti blindsiding O’Connell early on to set the tone. Bobby “High” Stickles backed up his nickname, and forward Don Watson had the stickwork cranking all night. Goalie Boo Davison threw up some bulletin board material after a dust up with Oglethorpe Captain Chris Maclean, “Pretty confident we win game 5 if we play our game. We got a little undisciplined early on and it cost us. Regroup and win it on Tuesday.”

The tide turned back toward Yellow Tuesday night for game 3 of the Meatbird Cup, with the Hosers taking a 10-5 win home to take a 2-1 series lead. Playing without rookie standout Mike Sullivan for the first 10 minutes due to equipment problems, Green could not counter a fierce offensive attack by the Hosers and were quickly in the hole 3-1 before Sullivan took his first shift. Backup goalie P.K. Andarian was peppered throughout and made some great stops, but the tireless attack proved too much to hold off. A game time scratch for wily veteran Pat O’C also hurt the Oglethorpes. He is due back for game 4. “We need him” said Captain Chris Maclean.

The Hosers played dump and chase all night, frustrating Oglethorpe defenseman Jake Clarke. “F&ck!ng bushleague play. Fine if they want to do it, but they better watch that puck coming back at them, cause its coming hard and at eye level” stated Clarke after the game. Tim Crowley had some highlight reel rushes reminiscent of his idol, Bobby Orr. But it wasn’t enough as goalie Boo Davison continued his solid play and held off the Olgethorpe pressure. Jamie Knight, back from suspension, anchored a strong 2 line attack for the winners.

Game 4 is Tuesday night 8:30pm at Hetland. Yellow has a chance to clinch so Green will be coming out strong to try to even the series.

The Green Oglethorpe’s stormed back to take game 2 of the Meatbird Cup with an impressive 7-4 victory.  The series is now even at 1 game a piece.  Green peppered goalie Boo Davison with an onslaught of shots, and his shutout streak finally ended.  Pat O’Connell, returning from his Caribbean training complex had a strong game, along with Mike Sullivan and the Brothers Clarke.  Instigators Shawn Coffey and Bob Stickles made their presence known.  Yellow had a few opportunities to narrow the gap late, but Tom Evans made some key saves to close out the victory.